A big shout out to my friends, fellow District 1 residents and all the residents in this growing city! The warm weather months are upon us. Surprise City Council will be on recess in July, therefore, we will not be holding any public meetings. With that being said, we are still working behind the scenes getting ready to embark on fiscal year 2017 that begins July 1.

May was another very busy month – not just for City Council but also for our staff. We have so many great employees working for our city. Many of our employees live in Surprise! Sometimes elected officials are inundated with so many meetings, ribbon cuttings, conferences, events, etc. in addition to preparing for and attending Council meetings that we take our support staff for granted. Since June marks the end of our fiscal year, I want to mention one person in particular of the many. Jodi Tas has been such a wonderful person to work with over the last three years and I often say “she makes me look good.” With juggling my schedule, making appointments for me and my fellow Council Members, even helping with my newsletters, I need to say thank you, Jodi!

My highlight of May was the grand opening and ribbon cutting of IRIS USA’s new 420,000 square foot North American Corporate Headquarters located on 30 acres within our Southwest Railplex Industrial District and the celebration that followed. The event was so important to the city and our future economic development that the regularly scheduled City Council meeting was rescheduled from Tuesday, May 3 to Wednesday, May 4, as many corporate executives flew in from the company’s home base in Japan to mark the great occasion. The new facility represents a $33-$40 million investment, 100 new jobs and $800,000 of new city revenues within the first year of operation. IRIS USA is led by President Chet Keizer. Parent company IRIS Ohyama, Inc. is a Japanese-based company and consumer products manufacturer with facilities in Wisconsin and Texas.


In a Special City Council meeting held on Thursday, May 5, City Council unanimously approved a settlement to end litigation between the city and Surprise Center Development Company, which owns most of the land around the Civic Center Campus at Litchfield and Bell Roads. Both parties are pleased to have finally come to terms on a settlement which achieves a full and final release of claims and believe this solidifies a partnership that will result in the development of a vibrant and engaging downtown in Surprise!

By now, everyone should have knowledge that the city is exploring options for funding capital improvements and considering a proposed $60 million 2016 General Obligation (GO) Bond. The money would fund capital improvement projects around Surprise over the next five years – from new fire stations to serve our growing city; to recreational amenities that promote community wellness; to road improvements that will create a more connected city. Several public meetings were held throughout the city in May to provide additional information and provide opportunities for questions and answers for our residents. City Council will consider and discuss what possible projects that would be included in a possible GO bond on June 7 and then vote whether or not to send the proposal to the November 2016 Election Ballot for voters to decide at our June 21 meeting.

I met with some of our Community and Recreation Services (CRS) staff on the morning of May 14 to determine how we can improve the beautiful parks we have in the Asante community located in the northern portion of District 1.

The City’s Audit Committee met on Thursday, May 19. I briefly discussed the City Manager’s new committee in my newsletter last month. These meetings are open to the public and held in the Council Overflow Room located on the first level of City Hall. The next Committee meeting will be held on Wednesday, June 15 at 2:30 pm. The dates and agendas for these meetings can be found on the city calendar events page at surpriseaz.gov.

WESTMARC’s Economic Development Summit was held on May 19 at the Glendale Civic Center. Governor Doug Ducey was the keynote speaker. I had a chance to chat with him prior to the start of the program. The Governor is very supportive of small business and he inspires them to be successful. After our conversation, the former CEO of Cold Stone Creamery stated “I used to sell ice cream!”

I hosted my last Friday Night Chat on Friday, May 20 until August. Due to scheduling conflicts, I have changed my regularly scheduled chats from the third Friday of each month to the second Friday of each month. Please take note of the change. The next chat will be held on Friday, August 12 at the Retreat Community Center at Arizona Traditions, 18250 W. Weatherly Drive. I will not be hosting meetings in June or July.

To recognize one of our previous city managers and the instrumental role he played in our city, we celebrated Dick McComb Wednesday, May 25. It was a nostalgic evening event filled with laughter and tears for our employees and residents. Mr. McComb was our City Manager during Surprise’s infancy and due to his leadership and vision we have grown to what we are today. As a newcomer to Surprise, I was envious that I didn’t have the opportunity to make those memories with him. The evening was filled with residents who had put down roots in Surprise, former council members and even a former Mayor. Thank you, Mr. McComb!

On May 26, I was honored to attend the promotion ceremony for some of our local heroes at the Surprise Police Department. Newly promoted are Enemecio Felix (Sergeant), Steve Turchin (Public Safety Communications Supervisor), and David Wood (Public Safety Communications Supervisor). For a moment, I’d like to congratulate Police Chief Terry Young for the great job that he is doing. I have been to a number of HOA meetings with residents with Chief Young and I was very impressed not only with his police work but the way he interacts with people. He is hired to PROTECT and LEAD his team. He is always very articulate, honest and straight forward, whether he is addressing our residents or the people that work for him.

Well, I’ll close for now and I hope to see some familiar faces along with the new ones at my next Friday night chat, August 12th. Until next month! As always be good to yourself, and be good to each other. 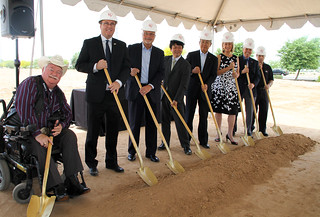 The new facility will house some 420,000-square-feet of manufacturing, distribution and office space and initially employ approximately 100 people, the bulk of whom will be recruited from the local area. The facility will be located within the city’s Southwest Railplex Industrial District and is scheduled to open in the first quarter of 2016.

View additional pictures from the groundbreaking.